With the power of SOAP and OData services in Microsoft Dynamics NAV everyone is now able to design a custom user interface dedicated for a simple task, both for employees and customers.

It should be interesting to grab the Visual Studio 2015 tools and start to experiment with the Windows Universal developement with Microsoft Dynamics NAV on the back-end.

The end goal, to have Windows running on all type of devices will open a lot of possibilities.  Go wild…

Just wanted to put this out there.

In older NAV versions you needed CALCFIELDS on a BLOB field before HASVALUE.  Now you can ask for HASVALUE before CALCFIELDS.

Having unsaved data in a BLOB field and doing CALCFIELDS will try to get the saved data into the BLOB field.  Try a code like this:

This CALCFIELDS will remove the data from the BLOB field.

Doing an INSERT or MODIFY before CALCFIELDS will fix the error, or simply remove the CALCFIELDS line.

I have been using SOAP services over the last years.  Only recently the RESTful web services have become more and more popular in my integration work.  Wikipedia says:

In computing, Representational State Transfer (REST) is a software architecture style for building scalable web services. REST gives a coordinated set of constraints to the design of components in a distributed hypermedia system that can lead to a higher performing and more maintainable architecture.

RESTful systems typically, but not always, communicate over the Hypertext Transfer Protocol with the same HTTP verbs (GET, POST, PUT, DELETE, etc.) which web browsers use to retrieve web pages and to send data to remote servers. REST interfaces usually involve collections of resources with identifiers, for example /people/paul, which can be operated upon using standard verbs, such as DELETE /people/paul.

So, what is JSON?  Wikipedia says:

Although originally derived from the JavaScript scripting language, JSON is a language-independent data format. Code for parsing and generating JSON data is readily available in many programming languages.

The JSON format was originally specified by Douglas Crockford. It is currently described by two competing standards, RFC 7159 and ECMA-404. The ECMA standard is minimal, describing only the allowed grammar syntax, whereas the RFC also provides some semantic and security considerations. The official Internet media type for JSON is application/json. The JSON filename extension is .json.

With JSON it is possible to deliver similar data structure as with XML.  JSON on the other hand requires a much less metadata.  Here is an example JSON from Wikipedia:

There is not a good support for JSON in native .NET from Microsoft.  However, with Visual Studio, Microsoft installs an external DLL in to the folder “C:\Program Files (x86)\Microsoft Visual Studio 12.0\Common7\IDE\PrivateAssemblies” 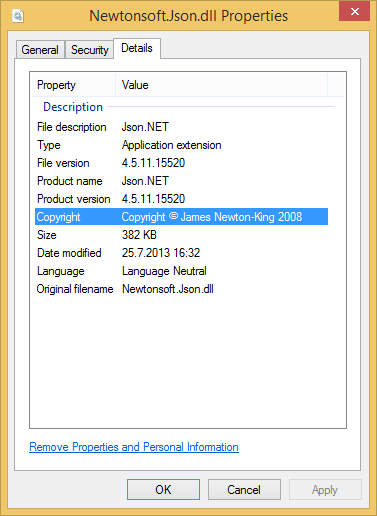 With this Json.NET in Dynamics NAV Add-ins folder we now have some way to handle JSON files.  Using this Add-in I created a NAV Codeunit to manage JSON text.

This Codeunit contains functions to build a JSON document, like

A function to import values from a JSON document to a temporary table, like

Or just a simple way to return a single value from a simple JSON string, like

With these functions NAV should be able to handle JSON files without any problems.

Now you can add JSON handling to your arsenal.