Earlier this month Arend-Jan contacted me about being a presenter on Dutch Dynamics Community NAV Event for March 2016.  Of course I was honored and after a moments thought I accepted.

The following presentation was repeated two times for close to 140 people in total.  I had a great time and am thankful for the opportunity.

I promised to share one Codeunit – that general mapping Codeunit – and here it is: Codeunit 60000.

If you download the presentation you can also read my notes.  They should help you better understand the whole story. 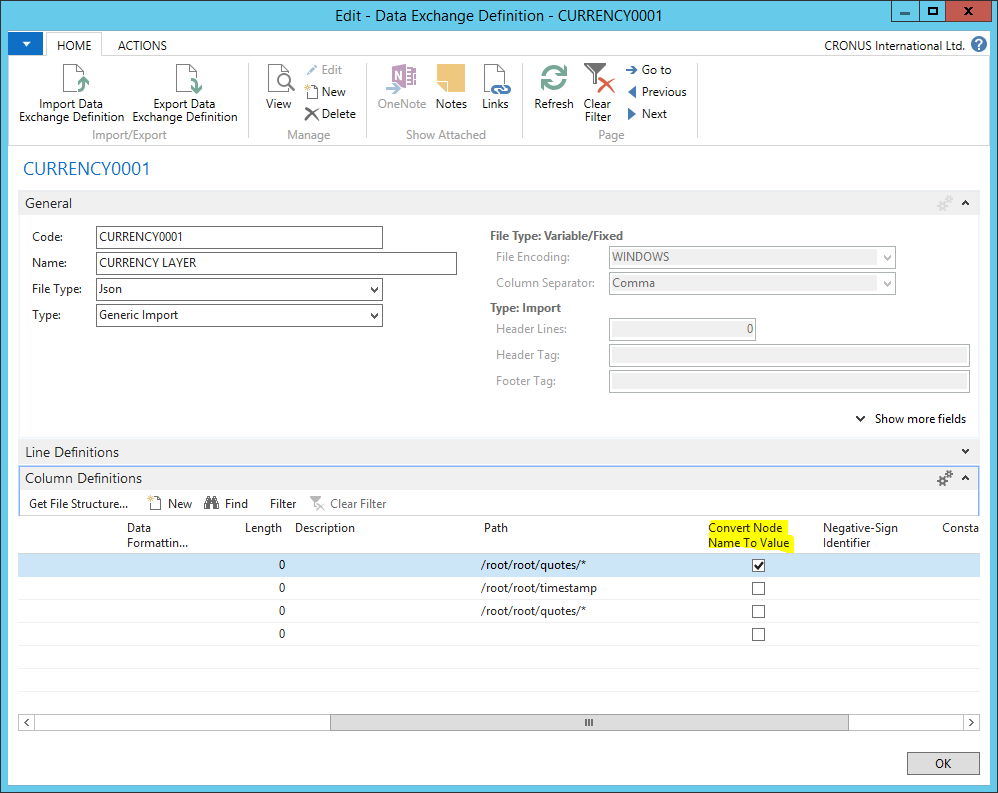 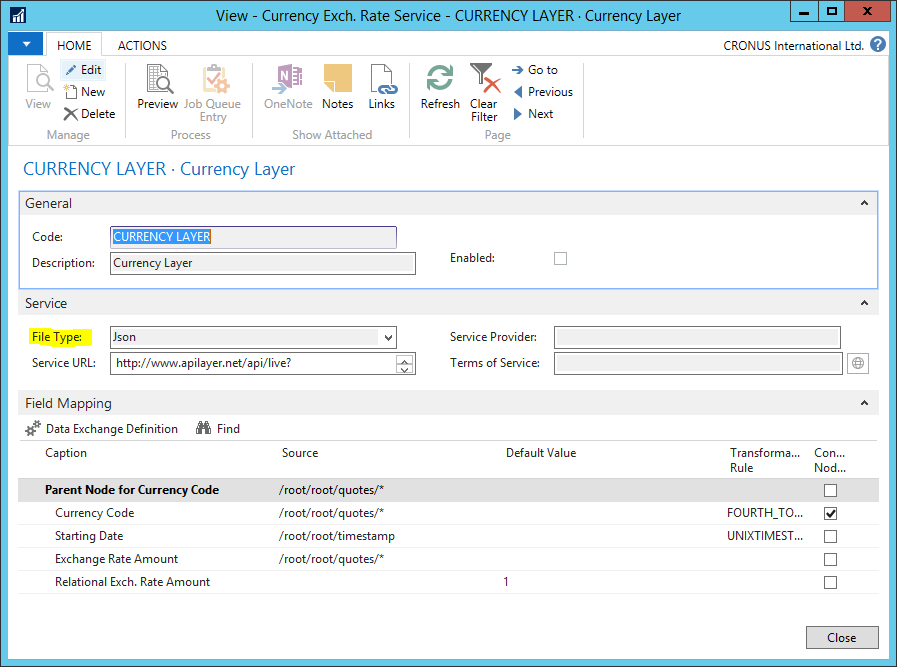 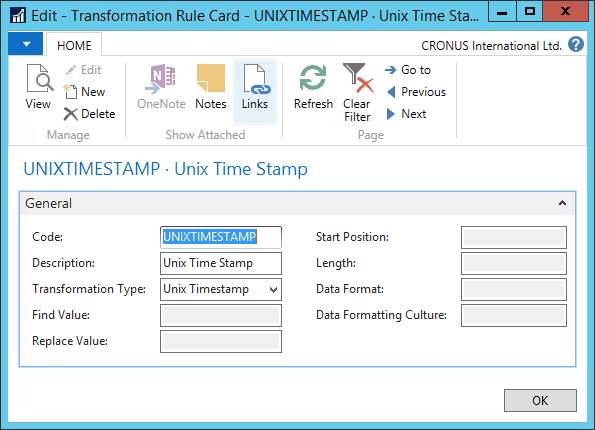 Asynchronous methods are very useful for web services.  To be able to start a process with one method and then check the status with another opens a lot of possibilities.

There are two known patterns in NAV that support asynchronous methods;  one is to use the STARTSESSION function to execute the business logic in another thread, the other is to create a job queue entry and let NAS handle the task.

I was talking to a client this morning and suggested using the asynchronous web services for his tasks.  I decided to write some code and test the functionality to see if my theory was working.

The first thing I need is a table for the requests.  This table contains the identification for the queue, the status and other details.

A single web service method is used to create a new queue entry.

I like to use the new TryFunction for my web services.  Note that when the queue has been inserted I fire an event with the newly created queue entry.  This means that I can extend this web service with events without having to modify the web service signature.

Each process needs a dedicated Codeunit.  That Codeunit is built on top of the queue record and thereby using the parameter table pattern. 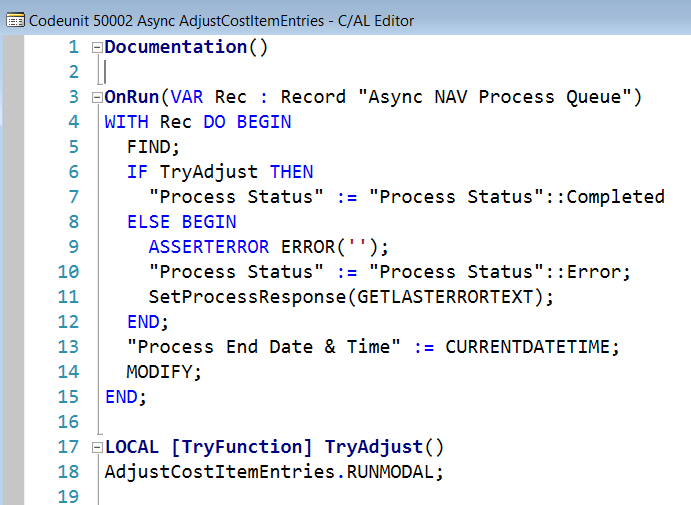 Note that this Codeunit is also using the TryFunction and taking care of the rollback if that function fails.

The process Codeunit catches the integration event and checks the process code before starting then selected task.

So, if I ask the web service to start a job called StartAsyncAdjustCostItemEntriesProcess, NAV will start a new session to execute the adjust cost for item entries.  The process that creates the queue and starts a new session is very quick so the response from the web service is almost instant.

Then we wait for a moment and ask the web service about the status for the newly created queue.

Again using the TryFunction to make sure that my web service will have a proper response to the query.

It is quite easy to extend this module by catching the OnNewQueueInserted event for each process code you build support for. 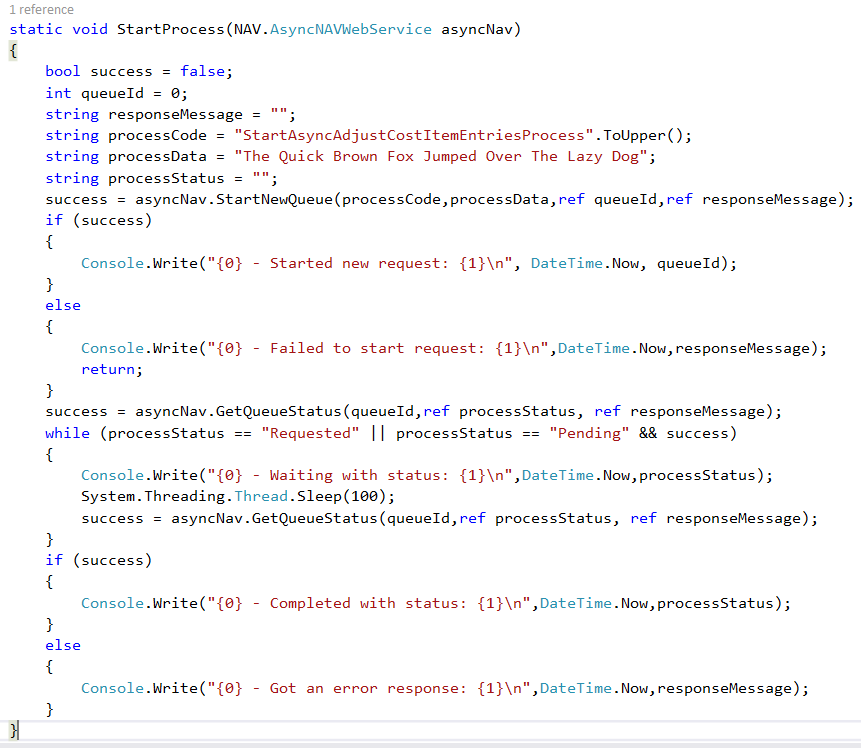 As you can imagine we can put anything into the ProcessData variable.  By using Base64 encoding anything can be converted to a text variable.

I hope this will turn on some lights and you will be able to use this in your daily work.

Attached is a zip file with the NAV objects and the C# project.

This conference, being held 9-10 May 2016 in Stuttgart, Germany, is a user-driven event dedicated to helping Dynamics NAV users maximize the return on their Dynamics investment. The programme schedule currently include the following sessions and more:

Experienced Dynamics users and partners will lead instructional sessions, showcases, and How2’s, focusing on past and current versions of Dynamics NAV. As an attendee you will:

The conference will be held at the International Congress Centre in Stuttgart, Germany on 9-10 May 2016. To learn more about the conference or to register today, please visit www.navugcongress.com. 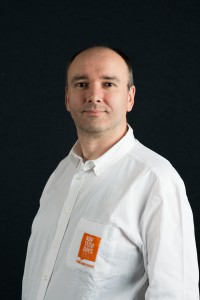 I have two NAV 2016 CU5 instances on two servers running a multi tenant application.  Every time I started the second instance everything froze.  Even the SQL Server stopped responding.  I am not going to pretend that I understand the issue, but still, I found a solution and wanted to share that with you.

We have a property for the NAV Service called “Max Concurrent Calls”.  This is, by default, set to 40.  I found out that if I lowered this value to 10 on the second instance I was able to start it.  That is a workaround, not a solution.  What if I want to start the third service instance, do I then need to lower that even more or update the configuration for all the previously running instances?

So I turned my attention to my SQL Server.  On MSDN Microsoft states:

This page also shows an example on how to configure this setting.  In that example the property is set to 325.  So, I tried that, returning the “Max Concurrent Calls” back to the default value for all NAV Services.  Happy times, everything is running smooth.

So how can two NAV Servers that have “Max Concurrent Calls” set to 40 flood a SQL server that supports 325 concurrent user connections?  I even looked at the network connections by executing

in command prompt and looking at the output.  The total number of connections was less than 50!  I think I must leave this to Microsoft or my friend Alain to explain this.

So it was clear; the Next, Next, Finish methodology failed me this time.  I needed to get my hands dirty and fix the SQL Server configuration.

First, I looked at the “Max Degree of Parallelism” property.  The default value is zero but is should be set to “No. of CPUs” – 1. 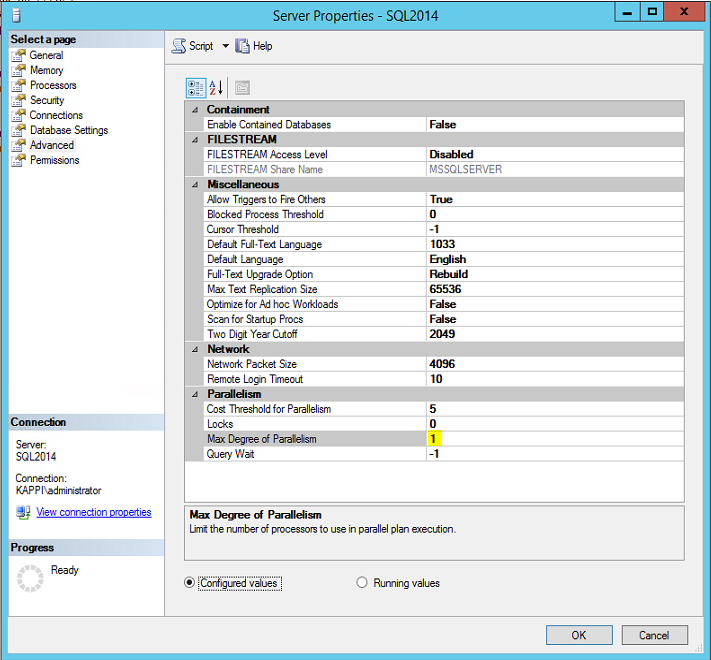 Then updated the connections property. 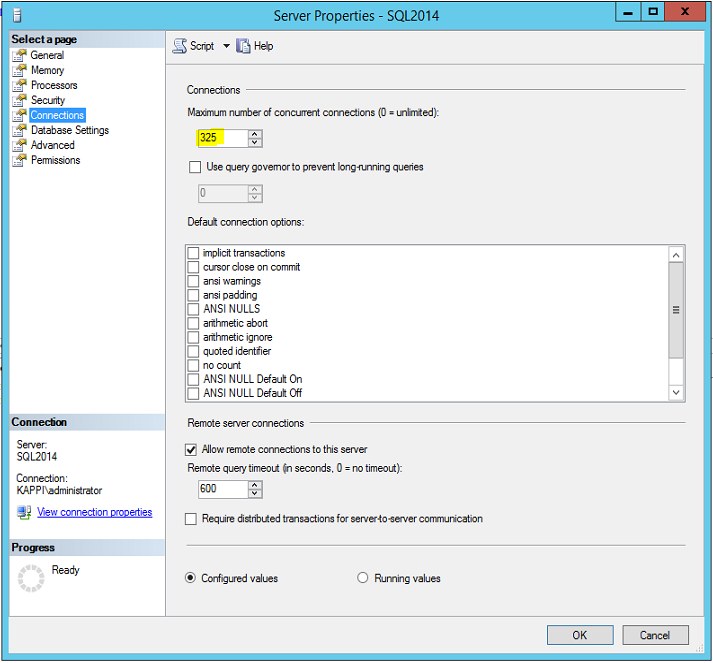 I restarted the SQL Server Service to apply changes.

I updated one more property and below is the SQL Query I used to update these properties.

Why this turns up in NAV 2016 and not in previous NAV versions, what changed, I don’t know.  Perhaps someone out there has the answer.

If you get stuck in a problem like this, see if you have NAS services running on both instances.  That seemed to be my problem.

What caught my attention is the highlighted fix. 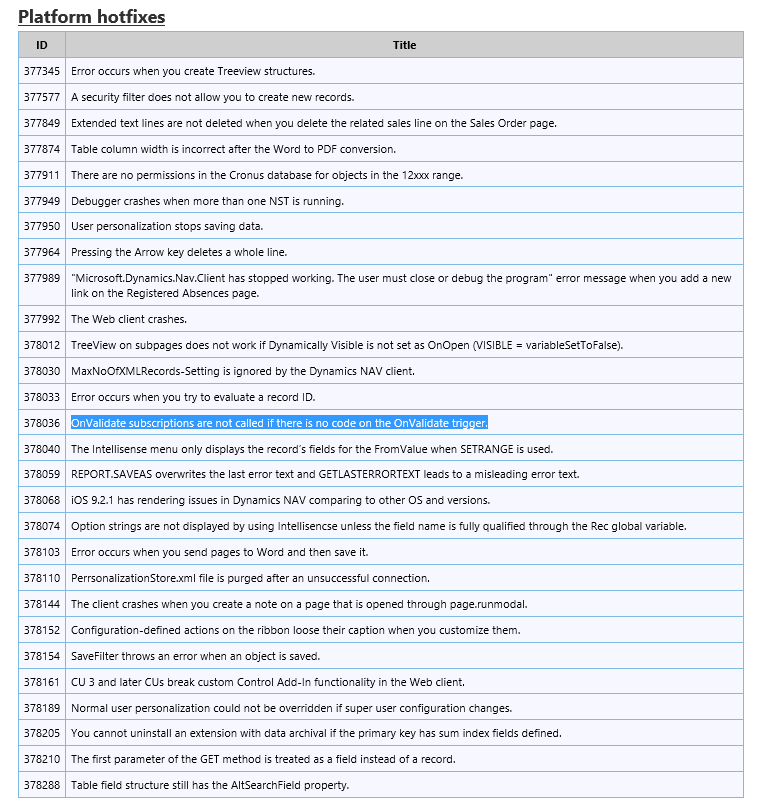 So happens that this very morning I was going to use this functionality and nothing happened.  Looked at my subscriber and everything seemed to be as it should be. 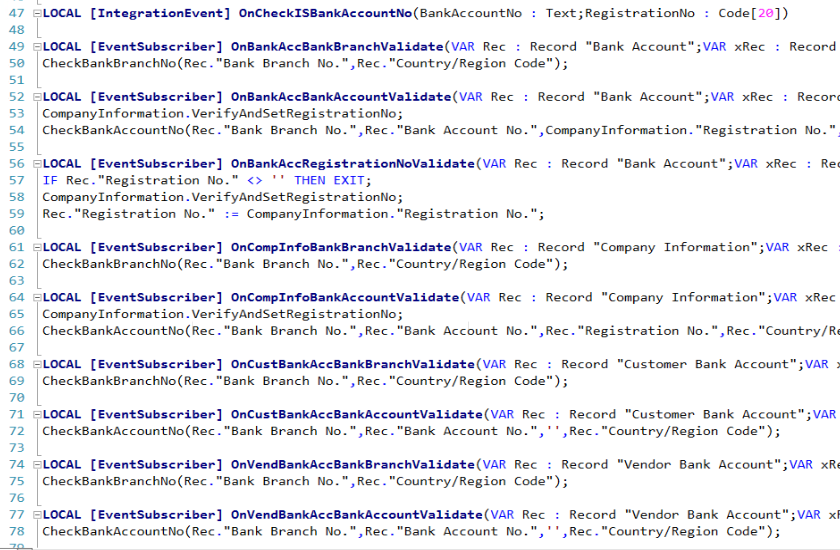 I guess I will need to apply this hotfix and see what happens.

You can expect a break point with an error similar to this one.

Well, not what you where hoping for.  Not the job you where planning to debug, right.  Well, you try again and get the same error, never getting to the error you wanted to debug in the first place.  And why is that?

Microsoft decided to utilize the TryFunction in the Job Queue

“We wrapped the FINDFIRST in a TRY-function because we regularly got (dead-)lock errors when we had multiple queues running at the same time, and this fix has virtually eliminated that problem. And since we cannot have return values from try-functions, we would have to pass on a boolean VAR parameter to indicate if it was found or not.”

Ok, so there is a reason, and a good one.

So, both problems fixed; (dead-)lock not causing the Job Queue to stop and we are not getting troublesome break points in the debugger.

Attached are Delta, FOB and TXT versions for this fix.