I would like to see a QueryRef object in NAV.  This object would be similar to RecRef from a developer point of view.

Behind the scene I would suggest that NAV starts to use the tempdb database. When a QueryRef.OPEN(QUERY::”VAT Entries Base Amt. Sum”) is executed I would like to see a temporary table created in the tempdb database and it would be populated with the SQL command INSERT INTO including all the rows returned by the SQL query.

At this stage everything that is done to a regular NAV table can be done with this tempdb table.  That includes being able to use this in a Page. 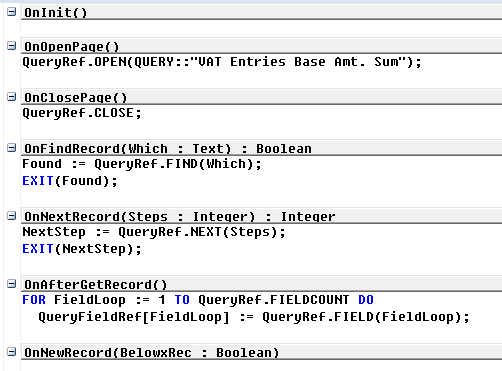 A QueryFieldRef is also required with similar functionality as FieldRef.  You get the point…