There is a new kid in town.  His name is Docker.

We are currently investigating how we can use Docker for deploying NAV. For test purposes we have created a Docker Container Image with the NAV Developer Preview, which you can try out.

Docker Containers is a technology where you, instead of virtualizing the entire machine, only virtualize the services and share resources from the host computer. Read more about it here: https://www.docker.com/what-docker

Read more about how to get started with Docker here: https://docs.docker.com/docker-for-windows/install/

So what does this mean?

We can install NAV environments as container both in Azure and on premise.  We can have multiple NAV versions to work with without having to install, so there is no conflict.  We can also get access to container images that are still in preview.

Note what Microsoft says, they are investigating.  The NAV Container Image service is not public yet.  You need authentication to get access.  This project has a place on GitHub.  To get access please contact Microsoft or send me a line and I will point you in the right direction.

The easiest way to get started is to try the NAV Developer Preview template on Azure,  http://aka.ms/navdeveloperpreview.  This will give you a full development environment for NAV Extension2.0 using VS Code.

It should be straight forward to install AdvaniaGIT on top of the NAV Developer Preview and start from there.  We can also start from Azure template called “Windows Server 2016 Datacenter – with Containers”.

The local option is to install Docker on our Windows laptop.  If you would like to use Docker on your laptop you need to change one setting after installation.  You need to switch to Windows containers.  Your laptop will most likely restart during installation and configuration of Docker so make sure to have your work saved. 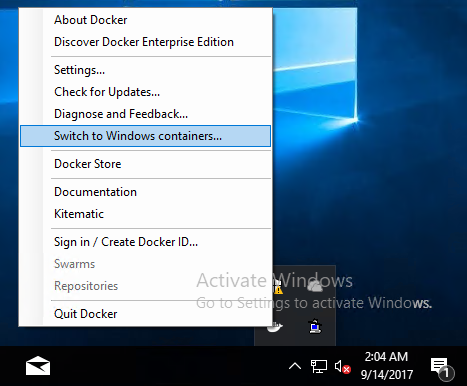 So, let’s get started

That’s all.  Your are now ready to use Docker with AdvaniaGIT.  Make sure to always have the latest version of AdvaniaGIT installed.

You can even use the “devpreview” build of NAV TENERIFE to do vNext development both in C/AL and AL.